His name is Victor. He is sitting by the step and I amble nearby waiting for my friends to come out of the shop. I’ve been seeing others like him since Bologna. They stand on street corners – stand, not sit – holding hats and beanies. Some of them, more industrious, will weave through the streets and offer an open hand as though they are an old friend checking if you have any change. They sometimes say ‘please’, or utter a few words I can’t understand. They sometimes look urgent and fearsome. But they are not like the ‘beggars’ that I know of. Their demeanour, the square of their shoulders, the weight of their stance, does not suggest to me that they are surrendered to their situation, to this place in society. Some of them bounce on their toes, flicking their caps up and down quickly, as though rapping an absent finger against a desk or a thigh. This is what I sense: restlessness, an impatience to move on from this place and to the next. An energy that shows this situation has not yet been accepted, habituated to.

His name is Victor, and when I drop a coin into his cap he looks at me, eyes wide, an emphatic ‘thank you’ and a shake of the head in ode to the exasperation of this vocation. I have been waiting for a chance to speak to one of these guys. To feel comfortable enough to reach out despite everything that women are told about speaking to strange men who are asking for money in foreign countries. I have been waiting for a chance to verify whether the things we read about in Australia, that we see in documentaries and news reports about the European refugee crises, equate to this. Is this man a refugee? An asylum seeker dumped here in Italy with no place to go? Is he fleeing civil war? Persecution?

His name is Victor and he is from Nigeria. He came over four years ago on a boat of 75 people. The boat left Libya at 10:30pm and by approximately 7am they were breaching the shores of Italy’s south coast. This route is among the most treacherous reported by Amnesty International. Victor says they call it the ‘journey of no return’: either you die, or you get to the other side. Either way, you don’t come back.

Why did he come?

Everyone tells me: you are from Nigeria? Such a rich country! Go back to your country! You are not a refugee!

But Victor cannot work in his country any more. There aren’t enough functional resources in his town for him to run his phone accessories shop. The less than two hours of electricity they receive each day is dwindling as grid power is sold to neighbouring countries, and increasing corruption means a man like him can’t get a job. He has a wife and a four year old daughter: her name is Desdemona.

His friend made the trip to Italy and found a job in Venice. He was lucky. Others, not so much.

People here are racist. Even if you do the work, they don’t pay you, they treat you badly. It is better to do this, he waves his open cap, than work for them.

But your friend got a job? I query him. He rattles off a phrase I don’t catch and holds up four fingers. I look at him puzzled. You don’t understand? He smiles.

You cannot judge a hand by each of the fingers. You get what I am saying? My friend was lucky, so far I am not, but I have faith in God. I pray and have faith that things will get better.

One of the things I love about visiting places like Italy is seeing the wear of time upon the architecture, the gradient colours formed when plush age-and-sun-kissed palettes of terracotta, plum and pink are bled upon by mysterious moistures and decay, abstract water paintings unveiling themselves on street corners and by the piping of air conditioners. Stems break through cement window sills, stubborn on their venture, and cracks form as extensions of the loping eaves. There is a continuity to the discord. A seeming affection to the way in which the old is overcome by the new, and the aesthetic of time-passing is reflected upon passers-by.

Such beauty is the stablemate of the continent. It’s reliable postcard offering. An old-world charm lives on through the thousands year old histories frozen into deep archways and dramatised bodies raised and gazing over cities and streets in testimony to a faith and culture still exoticised across the West as the visionaries for the greatest of romance, culture and art. But what interests me most is the questions that are confronted when these buildings begin to crumble and hollow of their use: what should be changed and what preserved? Is the function – ergonomic or aesthetic – of the past more important than the present? Is it better to live among the tenets of a bygone era or construct a reflection of the contemporary? What else is implicitly being decided when a decaying wall is lacquered? When a quiet church is converted to a retail fashion outlet? What does it mean when political slogans taint the facades of cultural icons? Is it not the living friction of time passing; the embodiment of multiple histories fighting for the space and matter upon which to be seen?

These questions heighten my awareness to the patterns of social cohesions and those of slight and fracture that occur alongside these spaces; the sub-economies of these terrains otherwise arranged to fit the eye to the nostalgia that we have conjured for so long alongside Bohemian novels and Hollywood. It is easy to forget, when idolised, that these places and stories too must grow into and out of the things that we ask of them. That their characters, like the buildings, decay and ruin, and devise themselves anew. Scribbled upon the walls and arches are the catch cries of emancipation demanded from new generations disenfranchised by the bricks and mortar of their city. No matter where in the world you go, the quest for agency from the past persists. In some cases, it is the quest for agency from one’s present.

It’s only 10 days old, he remarks. We look upon the sleek exterior of the elegant black gondola, golden angels affixed to its edges, head and tail, as though an emblematic jaguar jutting from a car bonnet. When I arrived I was frustrated that they all looked so new. I wanted to find an old one, an ‘original’. I wanted it to feel authentic.

Tomasz is 26. He wears a black and white striped t-shirt, like all the gondola men along the canals of Venice. It is a uniform, a costume, denoting both function and a homage to a caricature that they all attempt to fulfil. The character that we come to Venice expecting. Some of them add to it with a straw hat, whilst others nonchalantly disrupt it with a visible Nike tick across their sneakers. Most of them live at least 20 minutes away, he tells us. The ‘locals’ that is. The city is sinking by two to four millimetres each year, making a future inheritance dubious to young Venetians. And anyway it is too expensive to sustain a home or livelihood within the city walls. 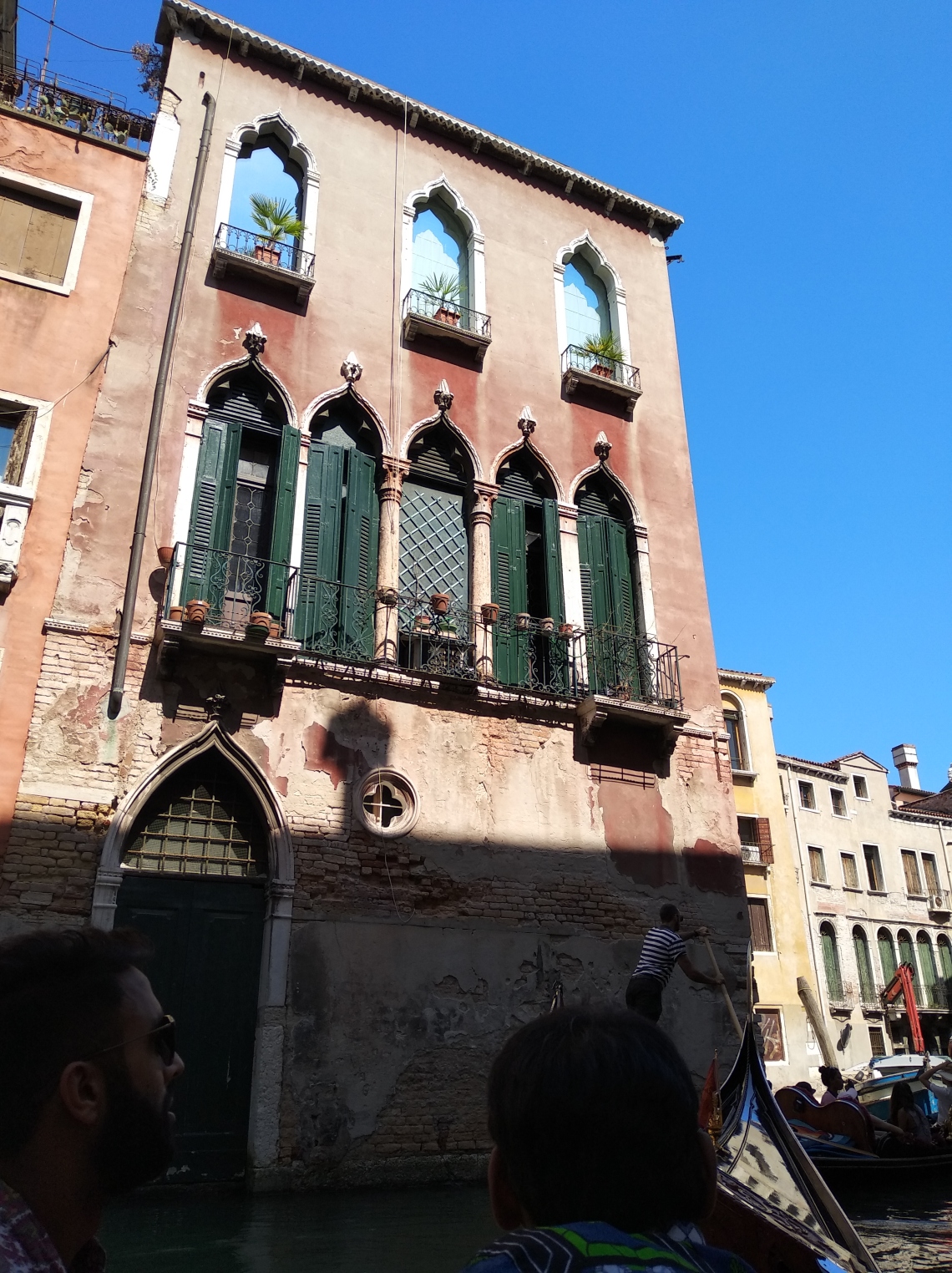 We listen as he rows, but are soon lost in the beauty of the city. It is undeniable. The enchantment of ever shifting water whispering down each corridor, echoing against doorways of aged and weathered wood offering ornate brass faces with which to open them. We shrink willingly beneath the storeys of Moorish window panes and wall-to-wall decadence of wrought iron fixtures against rich hues, magenta through forest green. We drink it up and twinkle child-like, warbling in the cool shadows, before the narrow boat is released out into the main canal, the Adriatic turquoise expanse glistening magnificent in the peak of afternoon sun. Domed giants teeter at the edge of the water and micro-figures cluster and splay beneath their shadows. A golden wind-teller holds his flag, swivelling with the gust.

One of the mornings I rise early and make my way through the streets, hoping for an espresso and sweet Italian pastry to start the day. It is 8am and only a few shops are open, but I find one and eke out a corner for myself among tables aligned by the window. Sellers are arranging their wares and dusting the glass in preparation for another day of the performance of this city. Dark-skinned men push large curtained carts heavy with Venetian masks, key chains and assorted souvenirs through streets.

It brings to mind the crew back stage at the theatre, pushing about the props and lights ahead of the performance. Most who come to Venice can agree that that is what it is: a city that performs itself, crafted upon centuries of awe-inspiring beauty transmitted through the eyes and mouths of all those lucky enough to witness it. Our gondola driver Tomasz, and no doubt so many of the locals that have left the city, are clearly resigned to this unstoppable phenomena. The city has transcended itself, become a gestalt with only limited agency over the stories that are told of it. Some relish in its myth, while others endure it. But certainly those who keep this fairytale moving have come in from far and wide, inserting themselves into the ornate supply-chain that keeps the enchantment churning for its visitors, one laughing mask at a time.

I don’t see Victor again, but the next time I see someone like him standing with an open cap I pull my coins out in advance. Some part of me feels like I know a different back story now, and maybe it is not the story of every one of these men, but it could be.  I drop the coin in his cap and he beams at me in surprise and gratitude. Good luck.

Later in the main square we see tourists crowded around the railings of a bridge giggling and taking photographs of an impressively large piece of graffiti tagged onto the side of a building in the canal. It reads “Bombing for peace is like fucking for virginity” in capital letters.

If not for these small indentations upon the narrative, it is easy to fall in stride with the beauty of a place like Venice. It’s narrow corridors preach quiet solitude, it’s canals a reflective relaxation, it’s windless squares are restive. The architecture almost breeds passivity. Time passes as though it cannot be acted upon by force or will.

Nevertheless, most people who visit Venice don’t feel the need to visit again. It is a novelty. An exquisite dish that excites the palate, but dissipates with no aftertaste.

How many places around the world must feel this way to us passersby, who will come home and reaffirm hundreds of years of its tales, in turn sending another hoard of us to its shores. Our ability to believe an enchanted past, despite the rumblings of uncertain present, a trick of history and mime, like so many gondolas glistening upon the canal.

Nithya Iyer is an interdisciplinary researcher, artist and writer. View all posts by nithyaiyer